skip to main | skip to sidebar

(R. Eliyahu ibn Chaim; c. 1530-1610; Turkey), Hanoten Imrei Shefer, Parashat Bereishit (p. 1a): R. Eliyahu states that most Talmudic sages believed the earth was flat—or at least not spherical—in contrast to the accepted science of his time, which he seems to accept. He states that there was a difference of opinion among the Talmudic sages on this matter—implying that at least some of the sages were wrong about it.

The relevant text can be found in the scan below, starting in the first column from the bolded word ואמנם (ve’omnam). 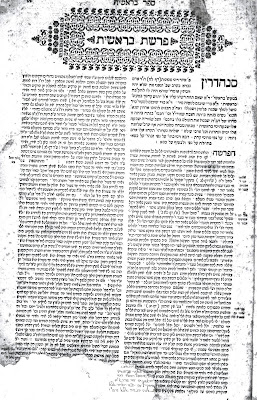 First [I shall discuss] what [the Gemara (Chagigah 12)] says, that [from one end of the world to the other, and from the earth to the sky] are the same distance, which seems entirely irrational—for since the heavens surround the earth, the earth being like a point in the centre of the circle, it is necessarily true that from one end of the world to the other is twice the distance from the earth to the sky. The earlier authorities wrestled with this problem; ultimately, Re’em [R. Eliyahu Mizrachi] was forced to say that “from one end of the world to the other” means not from one side of the [heavens] surrounding [the earth] to the other, but from the centre [of the earth] until the surrounding [heavens]. The truth is that this difficulty arises exclusively from the consensus among us nowadays based on the sages of the nations—that the heavens are spherical, surrounding the earth, which is like a point in the circle, and that the sun travels below the earth. But Chazal thought otherwise—that the sun travels below the firmament by day, and above it by night; and that the heavens are above the earth like a covering [as it says (Isaiah 40:22)], “He spread them out like a tent to dwell in.” According to this, it makes sense to say that [the two aforementioned distances] are equal. Indeed, [once one assumes] that this was the view of Chazal, [one finds] there are many midrashim that demonstrate it. However, the Gemara, Chapter Kol Hatzelamim ([Avodah Zarah] 41), says that the sages say only images with a staff or sphere in hand are prohibited; and the Gemara explains that the staff [is prohibited] because [it signifies] world domination, and the sphere, because [the image then appears] to be holding the entire world in its hands like a ball. It seems from this that Chazal’s view was also that the world is spherical, but this need not be inferred. For even though it is possible to ascribe to Chazal, too, the spherical model—by suggesting that [in their view] the heavens and earth are each half of the sphere, or that since the heavens are like a [domed?] covering [over the earth], they can be described as a sphere—this is unnecessary, for images made by others are certainly not made correctly and accurately, but rather based on their ideas; they would make a sphere in [the image’s] hand based on their belief that the world is spherical. Chazal prohibited such an image since the sphere demonstrated that it was associated with idolatry, not for us. Still, we cannot deny the existence of midrashim that follow the view of the sages of the nations. Nonetheless, most of their statements are based on the model I described; including their statement that the distances from the earth to the sky and from one end of the world to the other are equal. Still, they too disputed (Tamid, Chap. 4, p. 32) whether the distance from the heavens to the earth is greater, or from east to west; even though the sages’ decision there is that they are equal.…
[Translation by DES.]

Changes have been made to this blog.

(January 24, 2008) "He Who Must Not Be Named," which appears in old comments on this blog, is synonymous with DES. Most URL's containing "darklordsblog" will be current if "darklordsblog" is changed to "torahandscience".